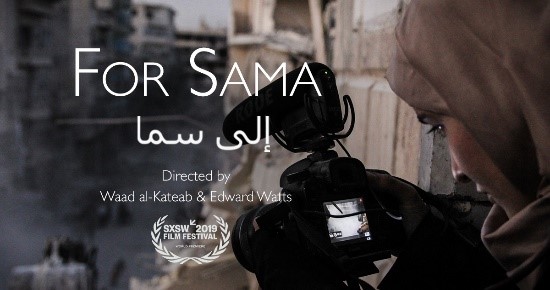 For Sama is a captivating and honest testament to the experiences of one woman and her community through the recent Syrian War. It tells the incredible story of Waad al-Kateab, a journalist/filmmaker who filmed her life for over five years during the conflict in Aleppo, Syria. Waad documented her personal journey as she married a doctor who operated the only functioning hospital in their besieged area, gave birth to a daughter (Sama), and continued filming the cataclysmic events unfolding around her. At its core, this documentary serves as a love letter from a mother to her daughter, as Waad captures deeply moving scenes of love, laughter, loss, sacrifice and survival.

For Sama has captured the attention of national and international audiences, winning the Golden Eye Documentary Prize at the Cannes Film Festival, and multiple audience awards at both the Munich Film Festival and SXSW. This week the film will screen at the United Nations, where the filmmakers have been invited to participate.