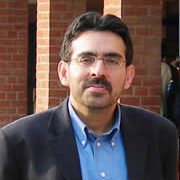 “Prophet al-Khidr, Between (the Qur’anic) Text and (the Mystical) Tradition”

Al-Khidr is uniquely placed in the Qur’an as a figure who at once unites and divides; is a healer of souls and yet hard to pin down. His memorials are found in every corner of the globe, but he is also seen as “immortal” – someone who has not “tasted” death. He is available to help any sincere seeker but he also “instructs” prophets of the highest rank. He attests to the idea of unity of knowability yet differentiates (or symbolizes the difference) between forms of knowledge (esoteric and exoteric). He is not above divine law, yet he performs acts that seemingly defy the law. This presentation will seek to identify what connects the many sides of this enigmatic figure who is revered in many Muslim cultures around the world.

Irfan A. Omar is associate professor of theology at Marquette University in Milwaukee where he teaches courses in Islamic and interfaith studies as well as a course on religion and nonviolence. Omar currently holds the Henri de Lubac Chair in Theology at Marquette. He has published several book chapters, journal articles, and book reviews, and has edited and co-edited seven books, including Peacemaking and the Challenge of Violence in World Religions (2015), The Judeo-Christian-Islamic Heritage: Philosophical and Theological Perspectives (2012). His monograph, El-Khiḍr : Le Prophète-Sage dans la tradition musulmane is scheduled to be published in fall 2018.