Walid El Khachab: “Mystical Patriotism: Palestine and the Politics of the National Dress” 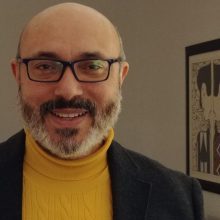 The production of the “virtual” nation of Palestine in film is associated with fabric artifacts, such as rugs and dresses, since the inception of Palestinian fiction cinema, or at least since the first international recognition of that cinema, thanks to Michel Khleifi’s Wedding in Galilee. These serve as metonymies of Palestinian-ness, reminiscent of paradise lost and reminders of a Palestinian cultural identity struggling against oblivion and imperialist cultural erasure.

Khleifi reinforces the trope of the female body wrapped in fabric as a metaphor of the “authentic” nation, through the politics of the national dress bearing distinctive ornamentations, i.e. the mark of history. In a major scene, the female Israeli soldier is enchanted with Palestinian-ness after she wears a Palestinian dress. However, another “nation” appears in the film when the bride removes her own traditional dress. Here nakedness embodies not the erasure of Palestine, but the gender-based violence associated with patriarchal traditions.

This mystical patriotism is nevertheless de-romanticized because of the constant blurring the nation’s image, thanks to the emergence of afflicted female bodies under patriarchal rule or under colonialist occupation.

Walid El Khachab is Associate Professor and Coordinator of Arabic Studies, York University, Canada, and the Co-Director of ACANS, the Arab Canadian Studies Research Group. He edited the volume: Arabs: Out of the Impasse? In French, published in Paris, Éditions Corlet, in 2004. Since then he has published in English, Franch and Arabic, in New York, Durham, Montreal, Toronto, Cairo, Istanbul and Paris more than 50 chapters in books and academic articles on Arabic cultures and Islam, particularly on national identities and modernity, the politics of mysticism and cinema & popular culture.