Waste Siege: The Life of Infrastructure in Palestine, with Sophia Stamatopoulou-Robbins (Bard College) 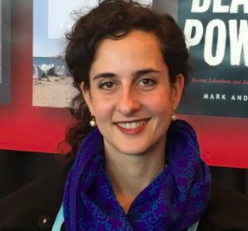 Based on Sophia’s book, Waste Siege: The Life of Infrastructure in Palestine, this talk offers an analysis unusual in the study of Palestine: it begins with the environmental, infrastructural, and aesthetic context in which Palestinians forge their lives, naming that context a “waste siege.” I argue that to speak of waste siege is to describe a series of conditions, from smelling wastes to negotiating military infrastructures, from biopolitical forms of colonial rule to experiences of governmental abandonment, from obvious targets of resistance to confusion over responsibility for the burdensome objects of daily life. I focus on waste as an experience of everyday life that is continuous with, but not a result only of, occupation. Tracing Palestinians’ experiences of wastes over the past decade, and their improvisations for mitigating the effects of this siege, I consider how multiple authorities governing the West Bank—including municipalities, the Palestinian Authority, international aid organizations, and Israel—rule by waste siege, whether intentionally or not. The talk depicts waste’s constant returns. It thus challenges both common formulations of waste as “matter out of place” and as the ontological opposite of the environment, by suggesting instead that waste siege be understood as an ecology of “matter with no place to go.” Waste siege thus not only describes a stateless Palestine, but also becomes a metaphor for our besieged planet.

Sophia Stamatopoulou-Robbins is Assistant Professor of Anthropology at Bard College with interests in infrastructure, waste, environment, colonialism, austerity, and platform capitalism. Her first book, Waste Siege: The Life of Infrastructure in Palestine (Stanford, 2019), won the Middle East Studies Association’s Albert Hourani Book Award (2020). Her current book, Homing Austerity: Airbnb in Athens examines how Airbnb is transforming the relationship between subjectivity, real estate, work, and aesthetics. Her work has also appeared in several journals and has received support from national and international funding agencies. More information about her work can be found here.