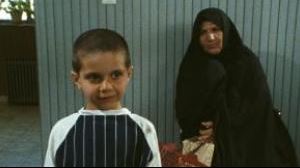 We are proud to co-sponsor the screening of two Iranian movies this upcoming semester, FIRST GRADERS (AVALIHA) and CHESS OF THE WIND (SHATRANJ-E BAAD). Both events are on the Middle East Studies calendar, where you can easily add the event to your own personal calendar. See more information about both movies on the Cinematheque’s website, as well as below.

Inspired by his own sons’ schooling, the first of Kiarostami’s two documentary features about education is a wonderful and fascinating movie that is often overlooked in favor of the later Homework (1989). First Graders looks in on a schoolyard of playful boys but mainly transpires in the office of a supervisor who has to deal with latecomers and discipline problems. You can almost see the boys’ personalities forming in their first encounters with authorities and peers outside the home. Preceded by two terrific Kiarostami short films: Bread and Alley (1970) and Toothache (1980). Co-presented with the support of UW Madison’s Middle East Studies Program.

A major rediscovery, this beautifully restored landmark of pre-revolution Iranian cinema was banned after a single screening and had long been considered lost. In an opulent, candlelit mansion, a wealthy family schemes against one another in pursuit of the remains of their inheritance. A haunting depiction of crumbling aristocracy much more redolent of Visconti than Kiarostami, Chess of the Wind is an essential addition to the canon of Iranian art cinema (MK). Co-presented with the support of UW Madison’s Middle East Studies Program.