Below are websites about various aspects of the Arab Uprisings, which started in January 2011 in Tunisia and quickly moved to Egypt, Libya, and around the MENA region.

Al-Jazeera: Arab Spring 10 years on
Thematic page including many links to videos, podcasts, photographic essays, articles, timelines, and other sources on the Arab Spring, including an interactive account on the unfolding of the Arab Spring, compiled from Al-Jazeera’s Twitter feed.

The Arab Forum for Alternatives
The Arab Forum for Alternatives is an Arab research organization established in Egypt in 2008 to consolidate the values of scientific thinking in the Arab region and to tackle political, social, and economic issues through objective and independent methodologies. The forum also offers social and political alternatives not only for decision-makers, but for all players in the public sphere, including different political factions and civil society organizations.

The Arab Reform Initiative
The Arab Reform Initiative is an independent Arab think tank working with expert partners in the Middle East and North Africa and beyond to articulate a home-grown agenda for democratic change. It conducts research and policy analysis and provides a platform for inspirational voices based on the principles of diversity, impartiality, gender equality and social justice.

Committee for the Abolition of Illegitimate Debt
Website on international debt, containing articles on the complex background to popular uprisings.
Articles on Africa
Article on the Arab Spring

The failed struggle for democracy in the Arab world, and what’s next
Tedx Talk by Amr Hamzawy.

How the Arab spring engulfed the Middle East – and changed the world
An interactive visualization of how the Arab Spring unfolded, by Michael Safi, Antonio Voce, Frank Hulley-Jones, and Lydia McMullan.

Rowaq Arabi
An electronic journal issued by the Cairo Institute for Human Rights Studies (CIHRS), Rowaq Arabi is a platform for researchers and rights advocates that offers in-depth discussions and analyses of human rights policies and developments in the Middle East and North Africa, utilizing approaches drawn from the social sciences, humanities, and law.

TheNewArab: A Decade After the Arab Spring: Special Coverage
Portal on the Arab Spring with articles, podcasts, and infographics, including a 2010-2020 timeline.
Portal
Timeline

858 An archive of resistance
In the first days of the uprising in Egypt, a Media Tent was established in Tahrir Square. Hundreds of videos were collected from dozens of people, men and women, young and old, who had filmed key events on their cameras and cell phones and wanted to contribute to the digital memory of the moment, in particular to document police abuses and killing of protesters. 858 is an initiative to make public all the footage shot and collected since 2011. On launch, the archive had 858 hours of indexed, time-stamped video material along with thousands more photographs and documents.

American University in Cairo: Egypt Politics and Revolution
“The January 25th Revolution website’s collection provides access to blogs, Twitter feeds, local and regional media coverage, and other sites related to the January 25th Revolution. It is maintained by the American University in Cairo Rare Books and Special Collections Library and features websites suggested by AUC students, faculty, and staff as well as other contributors to the University on the Square: Documenting Egypt’s 21st Century Revolution project.”

Tahrir Documents
“Tahrir Documents is an ongoing effort to archive and translate activist papers from the 2011 Egyptian uprising and its aftermath. Materials are collected from demonstrations in Cairo’s Tahrir Square and published in complete English translation alongside scans of the original documents. The project is not affiliated with any political organization, Egyptian or otherwise.”

VOX POPULI: Archiving a Revolution in the Digital Age
“Vox Populi is an ongoing project by Lara Baladi, which includes a series of media initiatives, artworks, publications, an open-source timeline, and a portal into web-based archives of the 2011 Egyptian revolution and other global social movements.” 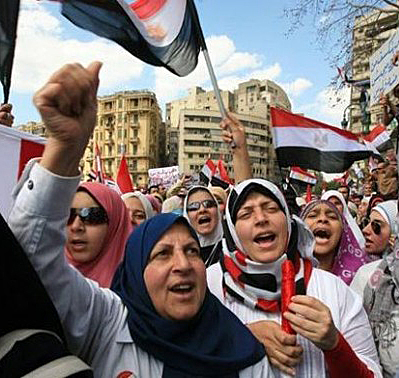