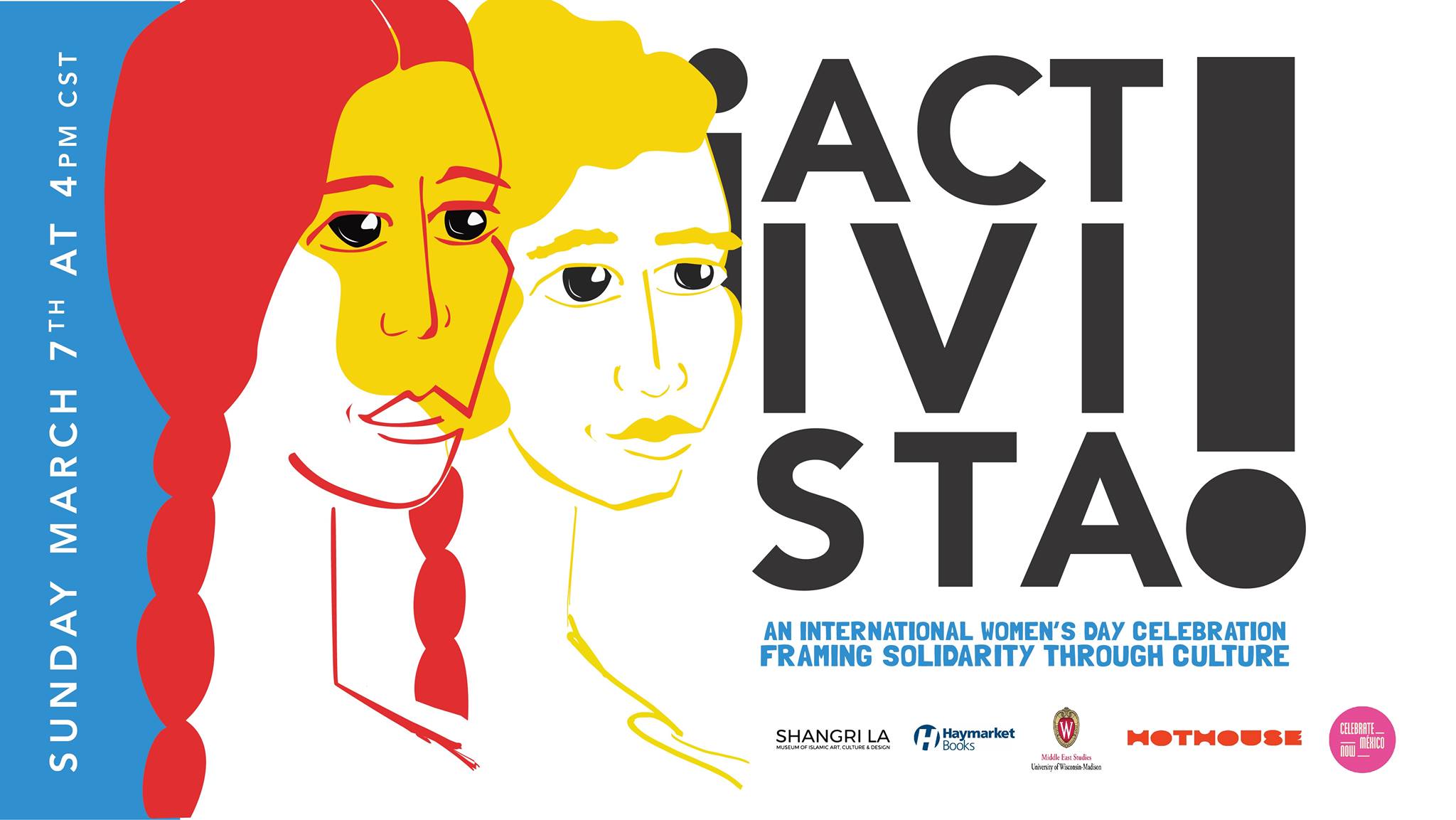 The program includes performances from women-identified artists, speakers, and messages from places located throughout the world. The two-hour free event is focused on concerns that impact the lives of women and reflect issues that represent the overarching values of the producers – climate change, access to health care (clean water, housing, childcare), immigration, safe provisions for family life, economic mobility and self-determination.

Angel Bat Dawid is a Black American Composer, Improviser, Clarinetist, Pianist, Vocalist & DJ. In 2018 Angel composed Song of Solomon: A Cosmic Space Opera that was performed by prominent free jazz musicians in Chicago. Her critically acclaimed Album “The Oracle,”released by Chicago label International Anthem was created entirely by her- performing, overdubbing & mixing all instruments & voices – and recorded using only her cell phone in various locations, from London UK to Cape Town RSA. Angel tours internationally with her septet “Tha Brothahood” and released the album LIVE, which made NPR’s best of 2020 list. She also leads the all-woman trio Sistazz of the Nitty Gritty, and has released the album “Message from the DAOUI” with electronic artist Oui Ennui as the duo DAOUI. Angel is a member of the Damon Locks Black Monument Ensemble and hosts a monthly music show on NTS Radio.

A group of women musicians/artists from Latin America and Europe, some residents in other countries such as Canada, Basque Country and UK, who came together to create and perform this song titled “Mujer Entera” which speaks of unity and of women’s empowerment. We share the belief that music and the arts are powerful vehicles of resistance and social change. With Constanza Duran Vidal, Chile/Canada, Silvia Balducci, Italy/London, Teresa Méndez, Argentina, Cristina Narea, Chile/Basque Country, Rosa Los Santos, Perú/Oakland.

Hailing from Guinea, Natu Camara is a musician and committed activist for the empowerment and education of girls and women in west Africa. In the early 2000s, Camara led West Africa’s first all-female hip-hop group, the Ideal Black Girls (IBG). The band released the album Guinèya Moumonèra (It’s Not a Shame to Be a Woman) – a multiplatinum opus advocating for women’s rights. In her latest album, “Dimedi” she sings in five languages. Natu’s foundation supports local organizations which mentor and empower young girls and support education as a tool to reduce poverty in Guinea. She won the prestigious 2020 NYC Women’s Fund for Media, Music and Theatre.

Lyla June is poet, musician, educator, anthropologist, activist and community servant of Diné (Navajo), Tsétsêhéstâhese (Cheyenne) and European lineages. She holds a degree in Environmental Anthropology with honors from Stanford University and a degree in American Indian Education with distinction from the University of New Mexico.

Brandy Nālani McDougall is a poet and educator who weaves the Hawaiian language with English to create a complex, bilingual texture. She received her PhD from the University of Hawai’i at Mānoa, where she currently teaches. She is the author of The Salt-Wind / Ka Makani Pa’akai (2008) and the scholarly monograph Finding Meaning: Kaona and Contemporary Hawaiian Literature (2016).

Irma Pineda was born in Juchitán, Oaxaca, Mexico. Her interest and activism for the human rights of indigenous people is due to the fact that her father, a Zapotec leader, was a victim of enforced disappearance by the Mexican army in 1978. Her texts have been translated into English, German, Italian, Portuguese, Serbian and Russian and appeared in various anthologies of the Americas and Europe. Pineda has held numerous residencies and was recently elected to represent Latin America and the Caribbean region as a member of the Permanent Forum on Indigenous Issues 2020-2022.

Named Jordan’s Musical Ambassadress, Jordanian virtuoso Farah Siraj balances a career that spans the US, Europe and the Middle East. She has performed at some of the world’s most prestigious platforms, including the UN, Nobel Prize Hall, the World Economic Forum, The John F. Kennedy Center in Washington DC and many others. Farah has performed before HM King Abdullah II and HM Queen Rania of Jordan, HM King Juan Carlos of Spain, HH Sheikh Mohammed bin Rashid Al Maktoum and HE Secretary-General of the United Nations, Ban Ki-moon. She represents Jordan annually on UN World

Yu Kyung-hwa specializes in traditional Korean rhythms as a composer, ensemble director, and instrumentalist while covering the range from pure Korean tradition to improvisation. She has a doctorate in musicology from Hanyang University. Prof. Yu plays the zither geomungo and performs various traditional dances, but it is in the art of the cheolhyeongeum and percussion instruments that she has, over the past few years, established her reputation as a performer and mediator between Korean traditional music and fusion music. Her work has earned her many prizes, including Artist of the Year with her first cheolhyeongeum recital and Grand Prize for traditional music in the category of stringed instruments.

JANEL PINEDA is a Los-Angeles born Salvadoran poet and educator. She has performed her poetry internationally in both English and Spanish, and been published in LitHub, PANK, The BreakBeat Poets, Vol. 4: LatiNext, and The Wandering Song: Central American Writing in the U.S. among others. As a Marshall Scholar, she holds an MA in Creative Writing and Education from Goldsmiths, University of London. Janel’s debut poetry chapbook, Lineage of Rain, is out now from Haymarket Books.

SEEMA YASMIN is an Emmy Award-winning journalist, medical doctor, disease detective and author. She was a finalist for the Pulitzer Prize in breaking news reporting in 2017 with her team from The Dallas Morning News for coverage of a mass shooting. Yasmin was a disease detective in the Epidemic Intelligence Service at the Centers for Disease Control and Prevention where she chased outbreaks in maximum-security prisons, American Indian reservations, border towns and hospitals. Currently, Dr. Yasmin is a Stanford professor, medical analyst for CNN and science correspondent for Conde Nast Entertainment.

MAYA MARSHALL, a writer and editor, is cofounder of underbelly, the journal on the practical magic of poetic revision. An educator, Marshall has served as artist in residence at Northwestern University and as faculty for the Loyola University Chicago creative writing program. She holds fellowships from MacDowell, Vermont Studio Center, Callaloo, Watering Hole, Community of Writers, and Cave Canem. She is the author of Secondhand (Dancing Girl Press, 2016). Her writing appears in Best New Poets 2019, Muzzle Magazine, RHINO, Potomac Review, Blackbird, and elsewhere. She lives in Chicago, where she works as a manuscript editor for Haymarket Books and managing editor for the BreakBeat Poets series.