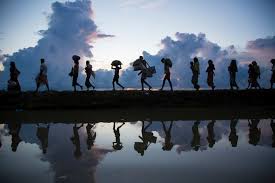 This interdisciplinary conference brings together scholars from the social sciences and humanities who examine forced migration within the context of the Middle East. It is organized by Nevine El Nossery, the Director of the Middle East Studies Program at the University of Wisconsin and Nell Gabiam, Associate Professor of Anthropology and Political Science at Iowa State University.

Syrian artist and architect Mohamad Hafez will offer a very personal view of what it’s like for an upper-middle class Damascene family to become forced migrants – their lives before and after, decision points, forced hands, and adjustment to new realities.  This will be an opportunity to better understand what the biggest humanitarian crisis since World War II looks like to an individual and family who have been through it. Mr. Hafez creates mixed and multi-media sculptures representing Middle Eastern streetscapes and buildings besieged by civil war, deliberately contrasted with hopeful verses from the Quran, audio recordings from his homeland, and other elements of his Islamic heritage.

While its geographical focus is the Middle East, the conference seeks to contribute to a better understanding of the challenges related to forced migration in the 21st century and to weigh in on attempts to find constructive solutions to these challenges. It aims to open up new ways of thinking about refugees and telling the many important and yet untold stories of migration.