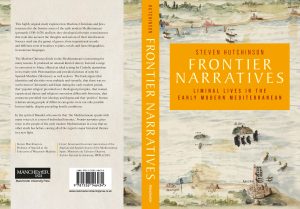 The Center for Middle East Studies is proud to announce that one of its affiliated faculty members, Professor Steven Hutchinson, has published a new book: Frontier Narratives.

This book explores how human interaction in the frontier zones of the early modern Mediterranean was represented during the period, across genres and languages. The Muslim-Christian divide in the region produced an unusual kind of slavery, fostered a surge in conversion to Islam and offered an ideal habitat for Catholic martyrdom. The book argues that identities and alterities were multiple, that there was no war between Christianity and Islam and that commerce prevailed over ideology and dogma. Inspired by Braudel, who asserts that ‘the Mediterranean speaks with many voices; it is a sum of individual histories’, it endeavors to allow the people of the early modern Mediterranean to speak for themselves.

Professor Hutchinson teaches in the department of Spanish and Portuguese at UW-Madison. The book is a publication of Manchester University Press.