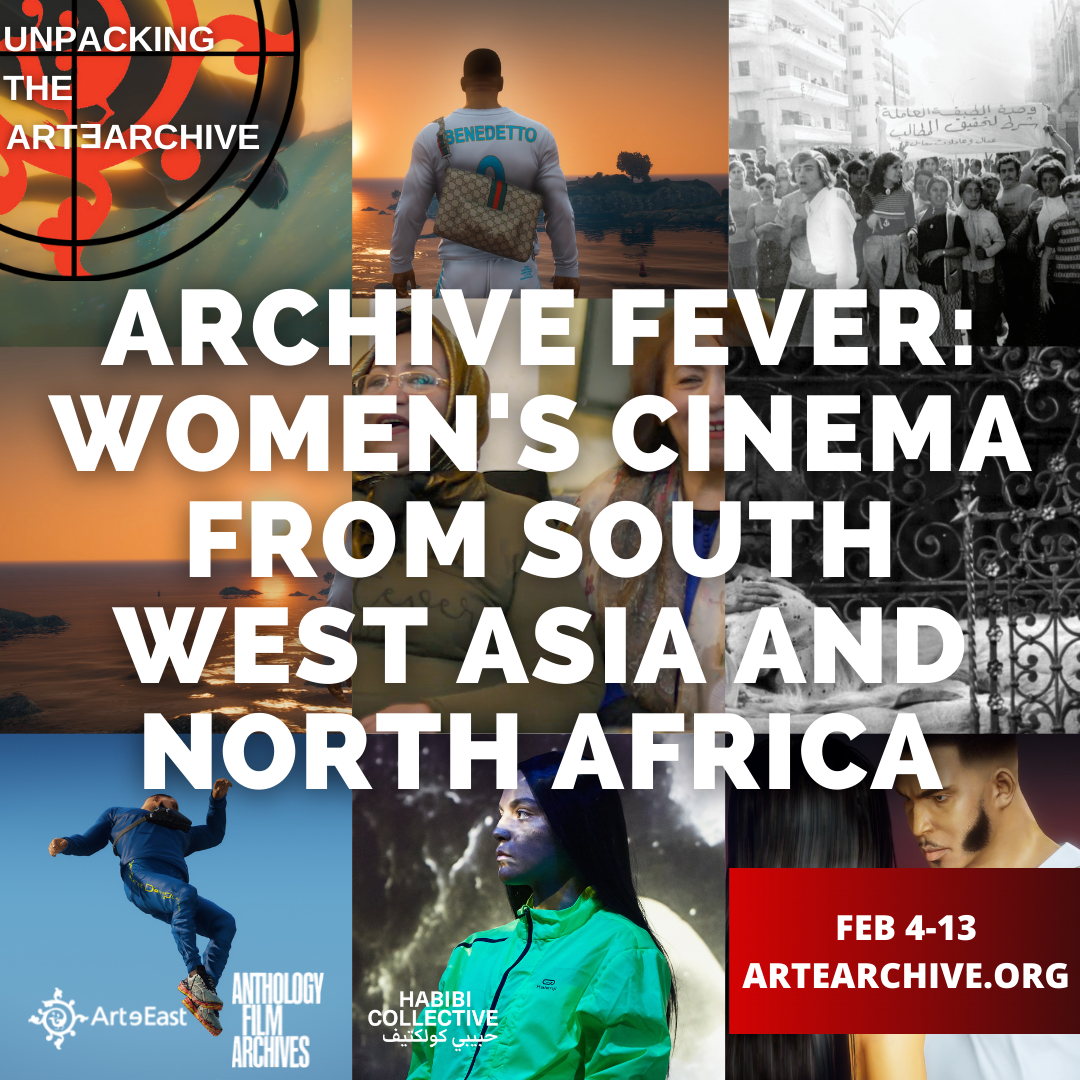 Co-presented by ArteEast and Anthology Film Archives, and curated by Róisín Tapponi, this series is part of the legacy program Unpacking the ArteArchive, which preserves and presents over 17 years of film and video programming by ArteEast.

The ARCHIVE FEVER film series includes a cult-classic from the archives, an essay film exploring the nature of archiving, and three experiments in transmission: celluloid, CGI, and the mosalsalat. They are examples of imagining otherwise, in a region where feminist histories remain on the margins.

In addition to  in-person, theatrical screenings at Anthology Film Archives, the series will be presented on Unpacking the ArteArchive from February 4 -13.

“This classic film from acclaimed novelist and filmmaker Assia Djebar is essential viewing for an understanding of women in Algeria. Taking its title and structure from the Nouba, a traditional song of five movements, this haunting film mingles narrative and documentary styles to document the creation of women’s personal and cultural histories. Returning to her native region 15 years after the end of the Algerian war, Lila is obsessed by memories of the war for independence that defined her childhood. In dialogue with other Algerian women, she reflects on the differences between her life and theirs. In lyrical footage she contemplates the power of grandmothers who pass down traditions of anti-colonial resistance to their heirs. Reading the history of the country as written in the stories of women’s lives, LA NOUBA is an engrossing portrait of speech and silence, memory and creation, and a tradition where the past and present coexist.” –WOMEN MAKE MOVIES

In her directorial debut, Mary Jirmanus Saba deals with a forgotten revolution, saving from oblivion bloodily suppressed strikes at Lebanese tobacco and chocolate factories. These events from the 1970s, which held the promise of a popular revolution and, with it, of women’s emancipation, were erased from collective memory by the country’s civil wars. Rich in archival footage from Lebanon’s militant cinema tradition, the film reconstructs the spirit of that revolt, asking of the past how we might transform the present.

A playful and moving portrait of some women in Morocco. Evoking reality television, home video, and ethnographic film, its visual language is at once intimate and whimsical, with the director’s digital manipulations by turns amplifying and undermining her subjects’ self-presentations. Bennani’s women discuss love and romance, dating and friendship, loneliness and community, all set against the terror of aging.

“A character study animated entirely within the Grand Theft Auto V video game, KHTOBTOGONE begins as a love story between protagonist Zine and the girl of his dreams, Bulma. But in introspective narration, Zine reflects more broadly on masculinity and coming of age in Marseille’s Maghrebi community. Inspired by the experiences of her male friends from southern France, Sadik collaged transcripts of their stories into Zine’s internal monologue. […] Sadik coaxes a refreshing vulnerability from a game designed to highlight idealized, heteronormative masculinity.” – Chloe Lizotte, LE CINÉMA CLUB