Natives Against Nativism: Palestine and the Movement for Migrant Rights in Postcolonial France 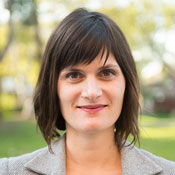 Against the erasure of the central role of the Palestinian question in the emergence of grassroots antiracist discourses in postcolonial France, Professor Olivia Harrison mines the journals, tracts, photographs, and video fragments that constitute the incomplete and fragmented archive of these movements for evidence of a distinctly transcolonial form of antiracist activism, grounded in anticolonial solidarity with Palestinians.

Olivia C. Harrison is Associate Professor of French and Comparative Literature at the University of Southern California. Her publications include Transcolonial Maghreb: Imagining Palestine in the Era of Decolonization (Stanford University Press, 2016), Souffles-Anfas: A Critical Anthology from the Moroccan Journal of Culture and Politics (Stanford University Press, 2016), and essays on Maghrebi literature, Beur and banlieue cultural production, and postcolonial theory. Her most recent book, Natives Against Nativism: Antiracism and Indigenous Critique in Postcolonial France, is forthcoming from the University of Minnesota Press’s Muslim International series.

This lecture will be in-person at Ingraham Hall, Room 206.  Registration coming soon!